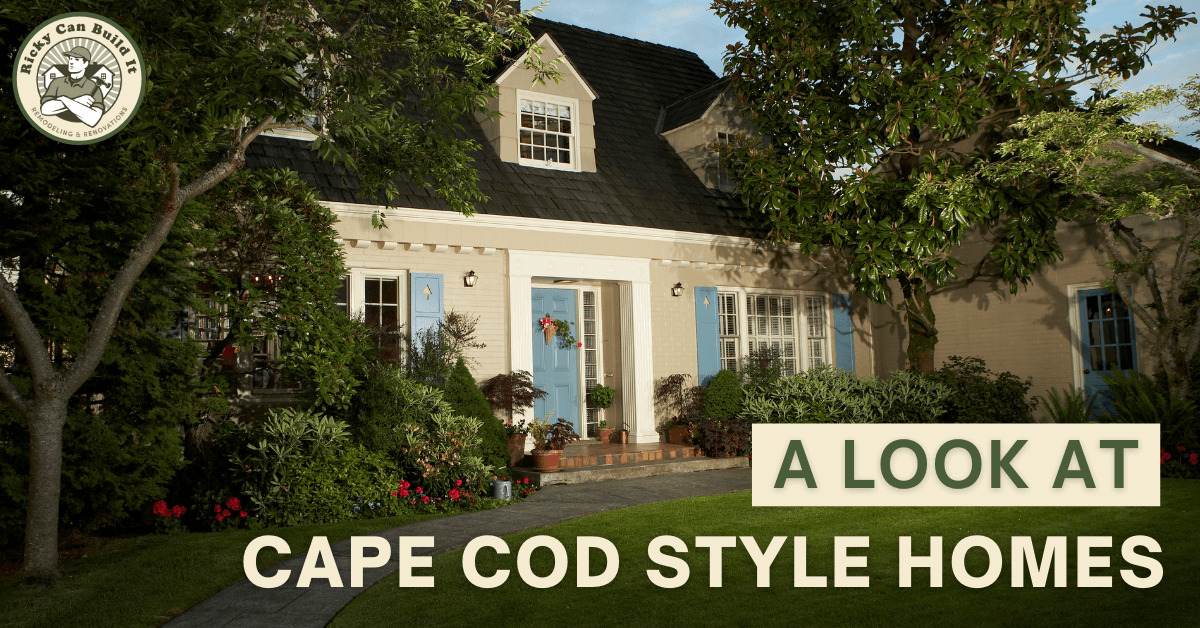 Cape Cod homes are a cozy and popular style that has been relevant since the 17th century. The homes saw a revival in the 1920s till the end of WWII as soldiers in need of affordable housing returned home from war. The modest size makes it ideal for small families or those wanting the flexibility to add additional space. Meant to withstand Cape Cod winters, these homes were both practical and well-liked among the North’s settlers.

There are a few different styles of Cape Cod homes; half or three-quarter Capes, one-half or single Cape, and then full Capes. Single Capes were the original starter home, believe it or not! Over time settlers kept adding more space to accommodate their growing social status or families. Rarely will you find a single Cape in the neighborhood, but full Capes are still prominent today.  Three-quarter Capes have a central doorway, with a window on one side and two (or one large) windows on the other. These homes also have windows on the second floor, unlike the single Cape. Full, or double, Capes also have a central door like their counterpart but have two windows on each side of the door instead of one. The different styles share an elementary and boxy frame with a sloped roof and low ceilings.

Full Capes offer more flexibility in the floorplan, which accommodates current needs and preferences amongst homeowners. The central doorway and double windows on each side were rare occurrences back in the 18th century, however, belonging only to wealthy settlers.

Most Cape Cods are one and a half stories, with an unfinished second floor. Today, many use the second floor as another bedroom or two, with a staircase leading up to it. This shift in style didn’t happen until the home regained its popularity in the 20th century. This also explains why we see many Cape Cods with two windows on the front-facing second floor. However, these dormer windows weren’t associated with the original homes, even though they’re now considered a vital characteristic of the style.

Cape Cods have more to offer than their sturdiness and history. The small roofs are easy to maintain and cheap to replace. And as mentioned above, their slope allows for snow and ice to slide off in the winter. Capes, despite their small-looking exterior, have a lot of space to offer its inhabitants. There are multiple variations of the classic floorplans, but each one provides the core benefits that make the style appealing—functionality, coziness, and hospitality. Even after adding additions or updating the exterior, it’s still recognizable.

There’s also the consistency of the style, both in what it offers and it’s popularity. These homes have been around for centuries, yet they never feel out of place nestled in their neighborhoods. They’ve grown and evolved to accommodate the needs of its owners while still keeping true to its roots and providing the coziness and practicality that made it so appealing in the first place.

The biggest drawback to Cape Cod homes is keeping it cool. Since the heat passes through the attic and into the house’s second story, the second floor can be uncomfortably hot during the summer months. Also, if the home is older and hasn’t had much work done, there’s a good chance that warm and cold air alike are coming and out through the windows. In addition to this, there’s also the struggle of evenly heating and cooling the home. Since most older household heating systems consisted of cheap oil-burning systems, many homes lack a crucial component; insulation. Most capes, especially those who still maintain many original features and fixtures, struggle with heating and cooling the home evenly due to these issues.

When building or renovating a home, it’s essential to keep in mind what functionality you and your family need. Think practically and honestly about what you need out of a home, not just what looks good on HGTV. Whether you’re taking on a whole home remodel or looking to build your own Cape Cod, look no further than Ricky Can Build It! Call today to get started!